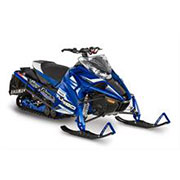 With a focus on innovation and performance throughout, every design created by Yamaha is an instant favorite with their fans. While they are known more commonly for their motorcycles, Yamaha was a leader in the race to create a reliable and safe lineup of snowmobiles decades ago. Here are a few things worth knowing in the history of Yamaha snowmobiles.

When looking at the history of Yamaha snowmobiles, you have to start with the groundwork done by others. Yamaha didn't create the first snowmobile in terms of the concept of a vehicle that could ride over snowy terrains. There were other individuals and manufacturers before Yamaha trying to make this vehicle a reality. Several manufacturers had a prototype but there wasn't an option on the market yet for consumers to purchase. When Yamaha bought a snowmobile model made by Bombardier in 1965, they set out to take this blueprint and mold it into a Yamaha snowmobile. They focused on adding double tracks to improve the stability of the design and began testing for control and speed the same year. In 1966, Yamaha took the snowmobile to several snowy locations such as Canada and North America to test it out. The results were less than impressive with some even calling them disastrous. The prototype had some serious issues such as the front end being too heavy and sinking into the snow, the engine being placed lower in the frame to help with gravity which ultimately made control a little harder, and difficulty with turns.

The start of the Yamaha snowmobile was off to a rough start, so the manufacturer went back to the drawing board. With a renewed determination to fix the problems others had noted with their prototype, Yamaha worked on the issues of design and manufacturing until they thought they had remedied the problems. In 1967, they began production on 300 developmental models. These models were tested to iron out any remaining kinks in the design or performance, and in 1968, Yamaha introduced the first snowmobile for consumers to the market. The first model was the SL350 and while people were excited about it, there were still complaints from drivers. The complaints included concerns such as the tracks offering too much slack when going downhill and making a turn, the engine lacking enough power, and steering skis breaking completely. The Yamaha team went back to work once more to perfect their designs once more. They would go on to introduce a few new models in the coming years which would change things for the brand.

Yamaha finally got things right when they introduced several new models in the early 1970s. These models remedied all of the complaints and then some with features such as reverse gear, electric start, and compact, lightweight chassis while also fixing the issues of design in the previous model. With these new and improved models, such as the SW396, SW433, and the EW643, more and more consumers wanted in on the fun and function of a snowmobile. While many people used them to get around or for backyard fun on their property, snowmobiles didn't truly take off until they hit the racing scene. With the introduction of the GP433, Yamaha was officially in the racing scene, even though it was purely accidental. They designed the model to be exceptional in terms of performance and people naturally started using them for racing. When Yamaha introduced its first official model with the intention of racing, the GPX433, in 1974, it solidified their standing as the best snowmobile manufacturer on the market. The coming decades would see many innovations and exciting advancements in design from Yamaha, such as their intrepid models like the Bravo, Vmax, Mountain Max, SRX, and more, which would make them a top choice for both the average consumer and the most competitive racers.